Algorithms Unmasked features six unique 3D printed masks made with algorithms. Each of the masks is grown on a 3D scan of a face by running custom simulations and algorithms.The project was exhibited at the Dutch Design Week, London Design Festival and Science Museum.

Algorithms often seem opaque and intangible, but are nothing more than a set of rules that form a procedure. These masks are the tangible result of four different algorithms. Based on a given 3D scan, the algorithms generate a 3D model, which can then be 3D printed. By giving one of the algorithms a different 3D scan, it can, by following the same steps, create a set of variations. Half of the masks have been printed in plaster and the other half in white resin.

The design process used to generate the masks is not unlike natural growth processes, which results in their forms resembling those we find in nature. One of the masks, Meandrina, looks like a coral from the ocean floor. Another, Antilopinae, has similarities with the rocks of Antelope Canyon in Arizona.

“Can we craft beautiful algorithms?”

Capturing the complexity and beauty found in nature is an age old pursuit and generative design now makes it possible to create the highly complex forms and structures found there. Not only that, the design can adapt based on different inputs, much like how plants follow light. In this case the design changes based on the 3D scan it is given at the start. This makes it possible to create a variety of designs from only one algorithm with relative ease. 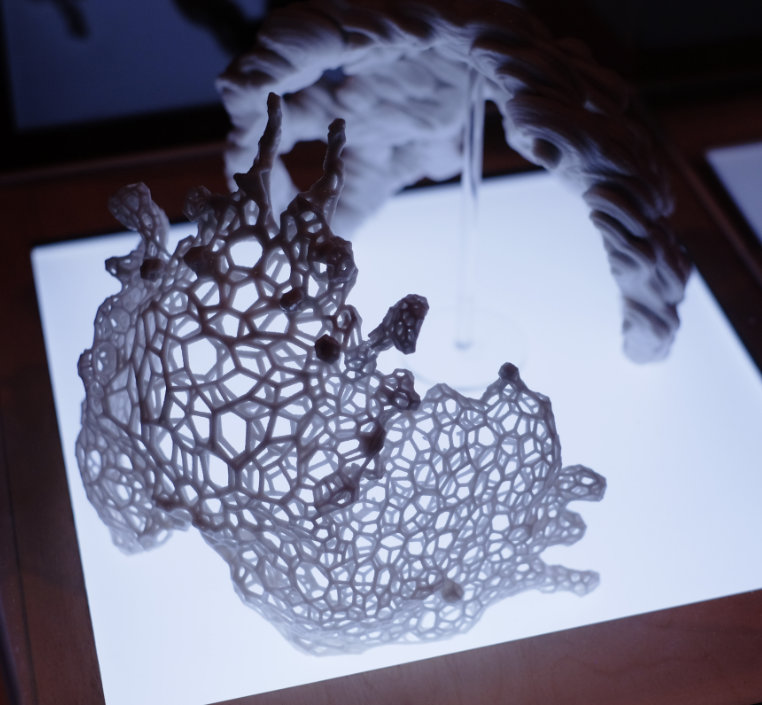 Resembling the structure of a termite (isoptera) hill with ventilation holes

This mask was generated by simulating how a liquid with particles inside interacts with the face. The suspended particles were then connected together to build up the final shape.

Resembling the form of a pocillopora meandrina coral

This mask was generated by simulating one type of natural growth. The surface of the face is grown upon step by step to create coral like structures. Each of the grown petals avoids colliding with the others as it reaches upward.

Resembling the form of the Antelope Canyon rock formations

This mask was generated intersecting basic shapes with the face and then deforming the surface with a finely tuned cellular noise signal which creates the layered and rocky appearance.

Resembling the contours of a scarab (Coleoptera Scarabaeidae)

Generated from simulated liquid colliding with a 3D scan of the face followed by procedural division of the form into a mesh. This mask's structure of beams was generated by first simulating how a viscous liquid would splash on a face, and then dividing that shape into cells of different sizes based on the face's curvature.